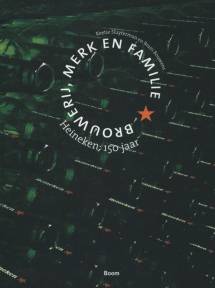 Brewery, brand, and family: 150 years of Heineken: describes the impressive national and international expansion of the brewing company acquired by Gerard Heineken in 1864. From a single brewery in Amsterdam 150 years ago, Heineken grew into one of the largest international brewery companies in the world. What is the secret of its success? Exploring the themes of innovation, internationalization, competition and cooperation, marketing, human capital, and corporate governance, the authors present and analyse the history of the company.

From the very start, the brewery recognized the importance of innovation. At the same time, Gerard Heineken, his fellow board members, and their successors were constantly on the lookout for growth opportunities. As early as the 1930s, they started expanding into Asia, Africa, and America. While they competed with other businesses, cooperation was also an important instrument.

Thanks to a consistent marketing and advertising strategy, Heineken became a global brand with a distinctive ‘green’ identity. Alfred Heineken protected this brand and ensured a continuing role for the Heineken family. Yet because of the strict financial limits that he imposed, the company was at risk of falling behind its competitors in the 1990s. Through four major acquisitions in the 21st century, Heineken reemerged as the world’s third largest brewing company, while maintaining its close ties with its founding family.

Keetie Sluyterman and Bram Bouwens both work at the History department of the University of Utrecht. They've also published, among others, a history of the Royal Boskalis.